Cruise with your Muse

I have just returned from a three-day cruise on the Navigator of the Seas, a luxury floating hotel that offers super accommodation, great food and entertainment. I bet you are thinking, “she’s so engrossed in cruises, she mixed up her posts.” Nope. I didn’t lose my mind on the dream ship. Imagine that our FRW 2009 conference bore another name: Cruise with your Muse. Thanks to our conference organizer, Aleka Nakis, we held our 2009 cruise on a ship, sailed to Coco Cay and had a fantastic time.

It all started the night before with a pre-sail party at the Ale House where we met our guests: editors, agents, writers and a few smart husbands determined to share their wives’ fun. I had the pleasure to greet my editors, Raelene Gorlinsky from Cerridwen Press/ Ellora’s Cave and Rhonda Penders from The Wild Rose Press. Of course Raelene wore her charming little hat and Rhonda donned a t-shirt printed with a large THE WILD ROSE PRESS on the front. 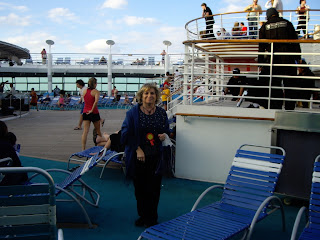 On Thursday my husband drove me and my friend and critique partner from Canada, Joan Frantschuk, to Port Everglade to board the humongous Royal Caribbean ship. We dropped our carry-on in the cabin we shared and rushed to deck eleven for a delicious lunch, but I couldn’t linger on visiting the rest of the ship. Duty called.

As the editors/ agents appointment coordinator I had to report to the second floor. While the attendees lined up for their ten-minute meeting with the editor or agent of their choice, I led the VIPs to their tables: Adam Wilson editor at MIRA Books, Kerry Donovan from NAL, Rose Hilliard from St. Martin’s Press, Jessica Berry from Resplendence Publishing, and my two editors, as well as agents Holly Root from Waxman Agency and Miriam Kriss from Irene Goodman Literary Agency, who all gave so generously of their time to the attendees they interviewed. So many writers ended up pitching to four or five editors/agents and received multiple requests for full or partial manuscripts. Pitching time extended for two hours on Thursday afternoon and Friday morning.

We patiently waited for the ship to weigh anchor while sipping drinks with FRW members, Traci Hall, Patrice Wilton, Jianne Carlo, Kimberly Burke, and chatting with Cindy Thomason, Zelda Benjamin and Allison Chase. By six-thirty the book signing started on the Promenade deck with over thirty authors selling and signing their books. We met many writers and readers before rushing to our cabin to change for dinner. Words fail to describe the elegance of the three-story dining room. I was sitting at the same table as Rhonda Penders and fellow author at TWRP, Maggie Toussaint, and later met Liana Laverentz, Loretta Rogers, J.L. Wilson and many others. During the Floridian Idol, some brave writers anonymously submitted the first two pages of their works in progress, read by bestseller author Heather Graham and Michael Meeske. They received oral critique by editors and agents while we sipped delicious drinks offered by FRW.


In addition to workshops, we enjoyed Christina Dodd sharing her journey to publication. Joan and I posed for a lovely picture with her. Aleka distributed gorgeous thank you gifts to the volunteers who helped her organize the conference. With hardly any time left to spare, we gathered for happy hour in the Dungeon lounge and mingled with our guests before dinner. While some of FRW tested their singing talents in a karaoke session, Joan and I shared a drink with Nancy Cohen and exchanged impressions about our fabulous conference.

The cruise ended too soon on Saturday morning as we exchanged last minute business cards. What a fun and productive conference! 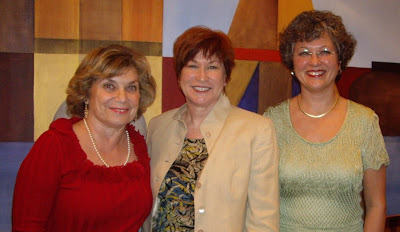 Only two days left for a fun contest:
the NIGHT 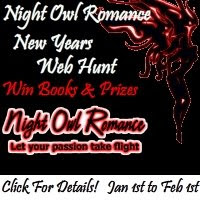 Enter the Hunt for the chance to win Ebooks, Advanced Reading Copies, Print Books and other author goodies. The hunt runs Jan.1st – Feb. 1st, 2009.Make sure to get your entry in soon. There are well over 30 items to win. 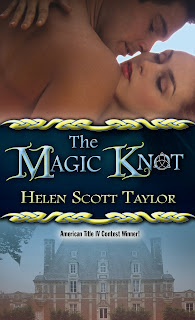 Today is D-day for my friend and critique partner Helen Scott-Taylor as her first book THE MAGIC KNOT is released by Dorchester.

THE MAGIC KNOT was the winner of the 2008 American Title Romantic Times contest for paranormal.

The Magic Knot from Dorchester Publishing

HE’S A BIKER WITH AN ATTITUDE
What woman wouldn’t be attracted to Niall O’Connor’s soft Irish brogue and dark good looks? But Rosenwyn Tremain must find her father, and she isn’t going to let a sexy, stubborn Irishman and his motorcycle distract her. Rose’s intuition tells her he’s hiding something, a secret even the cards cannot divine. Her tarot deck always reads true, but how can one man represent both Justice and Betrayal?

SHE’S A WOMAN ON A MISSION
Magic. Niall’s body tingles with it when he finds the woman snooping in his room. Rosenwyn might believe she’s a no-nonsense accountant, but her essence whispers to him of ancient fairy magic that enslaves even as it seduces. Her heritage could endanger those he’d die to protect, but her powers and her passion, if properly awakened, might be the only thing that can save both their families, vanquish a fairy queen bent on revenge, and fulfill a prophecy that will bind their hearts together with…THE MAGIC KNOT.

“THE MAGIC KNOT is a really wonderful story of magic, suspense, love, and mystery. What a refreshing new take on this idea of other worldly beings.”
—Coffee Time Romance

"I picked up this book, started to read and didn’t stop till I read the last page, closing it with a sigh of pure ecstatic, heart-warming bliss... A stunning debut for an author who instantly became a permanent addition to my bookshelves!"
—Realms on Our Bookshelves

“Helen Scott Taylor has charmed me with her own magic. I am pleased to have discovered a new author to read.”
—Manic Readers

"Ms. Taylor has written a story filled with love, magic, and adventure. I began reading this book in the morning and remained captivated until the very last page."
—Night Owl Romance Reviews