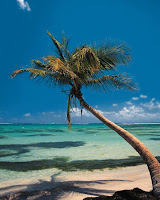 The summer months are a time to rest and relax--or if you are a busy author like me, the summer months are a time to write a book in three months, receive guests, entertain friends, babysit the gradchildren, visit the in-laws, prepare for a national conference, attend THE conference of the year, pitch your new story, submit a partial or full, edit your galleys, huh...did I forget something. Maybe.

Can I do all that? Why not? If I concentrate on the POSITIVE.
According to my friend Gaby, a known psychologist and preacher,
it takes twenty-one days to create a new habit, if you do the task daily.
Negative emotions are natural and provide us with benefits. They give us the

opportunity to learn, grow, and make changes in out lives. The key is not to get stuck in the negativity, but allow it to pass through its natural course and let it go. We will come in contact with consistently negative people and energy drainers. Let them be themselves but don't allow them to to suck you into their world of complains and demands. Change their focus. Not yours.

Rather than forcing yourself to deny negativity, balance the negative feelings with positive ones. Increase the quantity of your positive emotions by placing your focus on what you CAN do and build on them.
Here are simple techniques to cultivate more positivity: 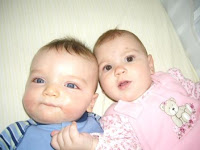 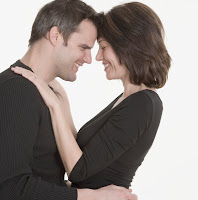 Once you replace negative thoughts with positive ones, you will start having positive results.

Do you agree with the psychologist? Can you follow his suggestions? 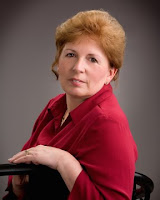 Autumn Jordon is a 2009 Golden Heart finalist with EVIL’S WITNESS, a Romantic Suspense set in the beautiful mountains of northeast Pennsylvania. It’s on sale now at the White Rose Press.

Let’s welcome Autumn and learn more about her new book.

Blurb:
Stephanie Boyd’s world crashes when she and her children witness a blood bath. To escape the wrath of the Russian Mafia, she has no choice but to help the FBI uncover the mafia’s mole inside the U.S. Treasury. While on the run with the handsome agent who is willing to die for them, Stephanie learns the meaning of love.

Agent John Dolton’s break in solving the case that cost him everything is a couple of kids and a beautiful widow. But keeping them safe seems impossible when their every move is foreseen by their enemy. Stephanie and her children soften the loner’s heart and John vows not to fail to protect the family he loves.

What inspire this particular story? Any anecdote behind it?

The idea for Evil’s Witness came about because of an incident that occurred at my family’s trucking company. Tractor trailers are high-jacked more often than you might imagine, and we’d hauled loads of currency for the U.S. Treasury. I simply put the two together and then thought what would happen if the robbery was witnessed by a small town woman. If the heists were conducted by the mafia, how would she get away from them, save her children? Where would she hide?

Excerpt of Evil’s Witness: Rapid gunfire and cries pelted the air, coming closer. Stephanie didn’t look back. She had to escape. She had to live for Bobby’s and Em’s sake. 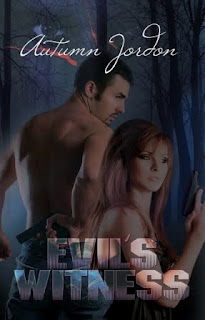 Can you describe your heroine: Does she look like someone you know physically? Did you give her some of your character, values, aspirations? What makes her special?

No. Stephanie is her own woman. Before I write a word of a new book, I’ll scan my character picture file. I’m always on the lookout for interesting faces. I’ve bought magazines just for the pictures of certain models. I’ll add a unique attribute: a scar, mole, or a certain mannerism. Maybe a disability. So, before I start, I have a great visual of my characters.

Stephanie is small town divorcee with kids. I’m small town, and yes, I went through a divorce with four children at home. It’s her determination to make a life for her and her kids that makes her so special.

Can you describe your hero: Does he look like someone you know physically? What are his best traits? What are his flaws? Did you fall in love with him while writing the story?

I found John Dolton in my character file too. He does have my dear husband’s dark mocha eyes though. He's a tortured soul. John, not my husband. To read why he is, skip over to my blog http://www.autumnjordonsnotes.blogspot.com/ His back story was posted on June 9, 2010.

Because of the man he is and the job he does, John has lost everything. When he finds the key witness he’s been longing for, Stephanie Boyd, who can help him nail the SOBs who took everything from him, he’ll do anything to protect her. Little does he know in the process Stephanie, and her children, heal his heart and he’ll fall in love for the second time. And yes, like, Stephanie, I definitely fell for him. Oh, John has a quirk. If you read the excerpt below, you will find it.

Excerpt of Evil’s Witness: Bean counter. Morse’s words haunted Randall, along with the memory of the dead Sheriff’s stare.
The phone he held rang relentlessly.
No answer. Randall hit the off button and slammed the phone down. Like a wild beast, he paced his office, waiting to be executed.


Tell us about the setting.
The story takes place in my backyard, in the Blue Mountains of Northeast Pennsylvania. Bodies are found in these beautiful surroundings.

Did you have to do special research for your story?

I already knew about the trucking industry so the basis for the plot was a no-brainer. I did however interview local and state police concerning their parts in working with other law enforcement agencies. I also interviewed the local director if the FBI concerning his job and the witness protection program. He confirmed a plot point of the story to actually have had happened within his own agency, settling a concern with critique partner. The mole in EVIL’S WITNESS could happen.

To make contacts, all you need to do is pick up the phone and say I’m a writer and I have a few questions about …. Would you mind answering them? You’ll be surprised how easy it is to get people to open up.

A bit of advice however, have your questions written down with the most important ones first. You are taking up the interviewee’s time and you don’t how much of it they can offer.

How long did it take you to write the story?

Do you work with critique partners?

Normally I write the entire story and then I’ll send the story out to readers/critique partners. After I get their feedback, I’ll edit, edit, edit.

Do you prepare an outline?

I start with a kernel of an idea or a great first line. I free write for maybe three chapters, getting the feel of the main characters. Then I step back and write a synopsis. I then use the synopsis to keep the characters in line while I finish the story. Often they want to go in another direction. I’m always open for discussion and sometimes they do add an element to the plot I hadn’t originally thought about. After THE END is typed, the real work begins. The tweaking and editing. Thank goodness I love this part of the process too.

When do you write?

Every minute I can. My motto has always been, Word By Word, Line By Line, Page By Page. I’ve completed five novels keeping the saying in mind.

How do you promote your books? 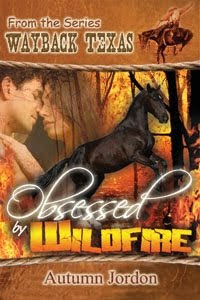 I’m on a three month blog tour for EVIL’S WITNESS over the next three months. Your readers can check my website (http://www.autumnjordon.com/) for dates of where to find me. I’m also on Face Book, MySpace, Twitter and my own blog to generate interest in the book. Every letter that is mailed by my DH and I has an EVIL’S WITNESS sticker on it and I do include bookmarkers inside. You never know where you’ll reach readers. I also plan to do book signings.

What is the worst part about writing?

When the muse goes missing, but I don’t sweat it anymore. I know eventually the perfect piece to the plot will come to me.

Here are the links to buy EVIL’S WITNESS:

John peered through the tilted mini-blinds into the lieutenant’s office. He studied the woman inside who sat on a couch, sandwiched between two kids.
A mental checklist ticked off in John’s mind. She was small, maybe a hundred-twenty-five pounds. Her arms and legs were scratched and bruised. If he had to guess, he’d say she was about five-six. A few light brown strands had pulled free from her ponytail and framed her tan face. The way she held her head, watching her children sleep, he couldn’t tell the color of her eyes.
Suddenly the little girl woke and scrambled into her mother’s lap.
Mesmerized, John watched the woman Zohara identified as Stephanie Boyd cradle her daughter, smoothing her hair and whispering into her ear— just like Julie had done with Katie.
Fury, as familiar as the air he breathed, flickered fresh in John and he fingered the rubber band he’d worn on his little finger for the past two years.
He punched the anger away.
He couldn’t deal with his demons now.
“They watched while their father was murdered,” Zohara said, pulling John back to the conversation.

I can't believe I haven't written anything in my blog during a whole long month. Actually since I left for Bermuda. 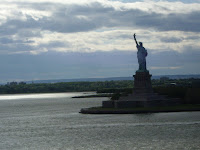 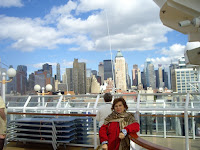 We boarded the ship from New York on a cold May day, 45 oF. Here are two beautiful pictures of New York taken from the ship.

After two freezing days at sea, we arrived in Bermuda and enjoyed three days of sunshine and warmer temperatures. 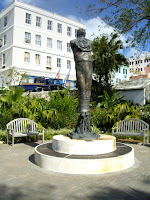 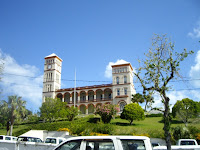 Bermuda counts 65,000 inhabitants. Our ferry guide explained that they love their queen and are very proud to remain a British colony. They pay no taxes and are pleased with their politicians. Unlike you, he said to the American crowd. 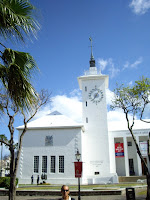 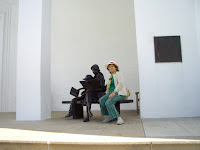 The capital of Bermuda is Hamilton and the touristique city is St. George. These pictures are taken in Hamilton. 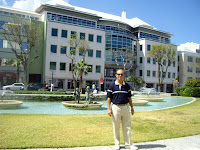 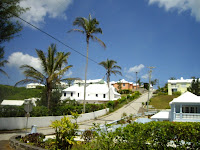 
You can travel from the Royal Naval Dockyard where our ship anchored to Hamilton by ferry, 20 minutes, or by bus, about 45 minutes, across a gorgeous countryside.
Main street is lined with European boutiques, the type you like to watch but would never dare to step inside. 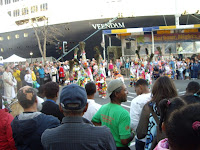 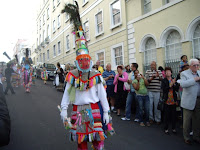 The festival of Hamilton takes place every Wednesday at the harbor, with music and Gombey dances, art and craft, food and drinks. 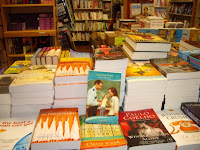 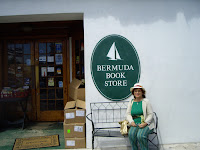 Guess what I found in Hamilton in the one and only bookstore ??? Cindy Thomason's HQ novel,
An Unlikely Family, in such an unexpected place. LOL

If you like to travel and love to read, come and enjoy my international romances. I will take you around the world through stories that simmer with emotion and sizzle with heat~