Mykonos is probably the most cosmopolitan of the Aegean Islands. I visited four times in the last twenty years, the first time when my children were teenagers. 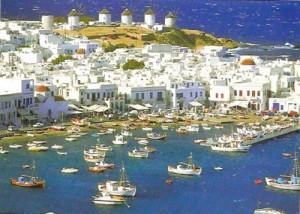 We fell in love the picturesque island and went back the year after. The streets are a maze of narrow, winding alleyways - many only two or four feet wide, overhung with dazzling pink and purple blossoms. 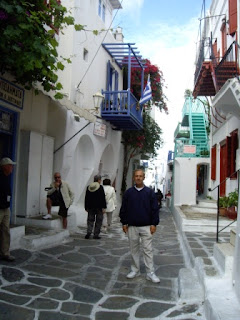 All the houses, shops, churches, restaurants and windmills are immaculately whitewashed, with door frames and window shutters highlighted with splashes of sky blue and jade green. 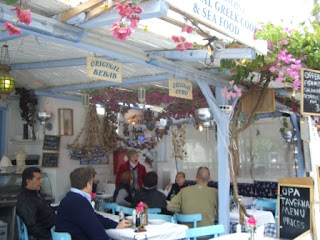 On every second doorstep sits a cat, gazing down serenely at passers-by. 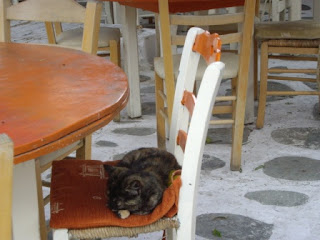 From HER GREEK ROMANCE, here is a description of Mykonos as the heroine Ashley sees it from Stefano's yacht:


“See, we are passing Chora, the capital of Mykonos.” 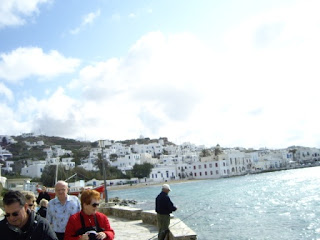 “Now, keep your hands on the helm and steer to the left.” 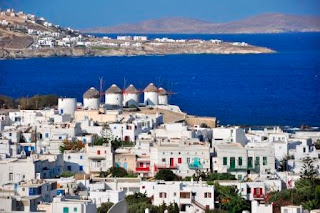 The Athena glided through the water and gained speed. Stefano opened the side windshield and let the breeze invade the pilot station. “What’s your pleasure?”
With a toss of her head, Ashley flung her hair back and took a deep breath. “Can we stay close enough to the shore to discover the beaches?”

“Absolutely. This little cruise is all yours.”

Exhilaration filled her heart. She steered a superb ship and the captain was determined to please her. “Thank you, Stefano. I really appreciate you taking the time to show me your beautiful island.”

“We’re passing Korfos. Keep straight. The main island is looping into a cape. Now you can see Agios Ioannis—St. Jeanne Beach there. It’s small but picturesque.” He handed her a pair of binoculars and she scanned the beach.

Blood rushed to her cheeks at the sight of the topless bathers lying on towels or relaxing on lounge chairs. A couple hours ago, she’d been soaking up the sun on a similar chair—in a similar pose. Good thing Stefano had been lazing in a café. Besides, he didn’t know her at the time and wouldn’t have noticed her in the crowd.

Lowering the binoculars, she glanced at him. His face expressionless, he stared at the horizon and hadn’t noticed her embarrassment. “We are crossing a strait between Mykonos and the ancient island of Delos. I’ll handle the helm while you enjoy the view. The rocky islet offers an impressive exhibit of columns, temple remains, and statues of lions.”
Ashley shifted to the other side of the pilot station and adjusted the binoculars to her eyes while Stefano took back the control of his boat. 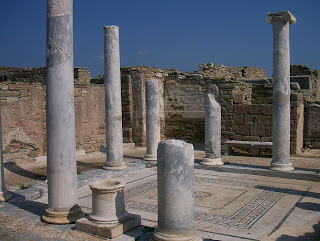 “Delos is the birthplace of Apollo. His mother, the nymph Leto, was seduced by the god of gods, Zeus,” Stefano explained while Ashley admired the sculptural ruins of sanctuaries. “When his wife, the goddess Hera, learned of his treachery she banished the pregnant young nymph from earth.”

“What happened to Leto?” she asked, genuinely interested in the sad love story. Had all the Greek maids been destined to suffer because of love? She had Greek blood in her veins and wanted to hear of a happy ending. 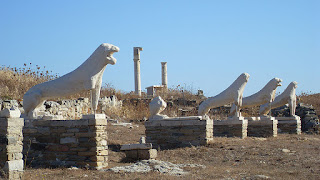 “Poseidon, Zeus’s brother, rescued the nymph and had her deliver her baby on the island of Delos which wasn’t considered as part of the earth.” Stefano told her more about the history of Delos, a necropolis with too many burials for her taste.


No happy ending here. They passed Delos and continued to cruise.
“What’s next? Is there anything more fun than Delos and its dead?”


“Sure.” He navigated through the crystalline waters, along miles of golden sand uninterrupted by umbrellas. He gave her a strange smile and brought the boat closer to shore. “Keep watching. We are coming to the most famous beaches of Paradise and Super Paradise where young crowds like to gather.” 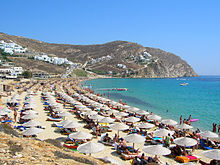 Scanning the coastline through the binoculars, Ashley spotted rows of umbrellas made of palm leaves, sun beds and beach bars, as the Athena smoothly sailed past. At the end of the crowded area, the shore curved into a hidden bay with clear water. Small rocks dotted the sand and rocky hills provided a background to the secluded place devoid of umbrellas and chairs. Yet the beach was not deserted. People strolled in group or couples.

Ashley scowled as she focused on the vacationers. Was she seeing correctly? She removed the binoculars and fixed her attention on a couple holding hands. “No way,” she gasped and then stared again through the magnifying lenses.
Stefano chuckled.


She swirled toward him. “They’re naked. I mean completely.”
“It’s a nudist beach,” he said matter-of-factly.

HER GREEK ROMANCE, 99cents at Amazon  http://tinyurl.com/76br7ze
5* “I was swept away to the beautiful Greek Isles and was lost in the story. Easy, quick paced, heartfilled read." 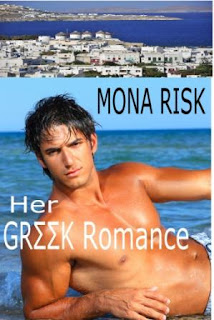 Stefano Kostapoulos plans to demolish the dilapidated Pink Villa inherited from his grandmother and build a modern resort on the Greek island of Mykonos. But the American co-owner refuses to sell his shares and sends his attorney to Greece--a lawyer Stefano plans to shred to pieces at the hearing.

Except that Counselor Ashley Sheppard is a gorgeous redhead who knocks Stefano off his axis when he meets her incognito. Sparks fly during a first encounter that leads to a memorable night of passion.

In court, Ashley is in for a nasty surprise. Her handsome Greek god is the opponent. Her heart gnaws with pain, yet she attacks him with all her strength to defend her grandfather's case.

Stefano wins the lawsuit, but is about to lose Ashley. To keep her in Mykonos, he strikes a deal with his old enemy. Does Ashley dare to trust the Greek playboy? Or even understand her grandfather's strange change of heart regarding the Pink Villa?
Posted by Mona Risk at 1:28 PM 12 comments:

I am in Dictionary.com

How cool is that!

Word of the Day

2. An immediate estimate or judgment; understanding; insight.
3. An outline or summary.
Quotes:
Dr. Lornier, if you would be kind enough to give us a summary of your accomplishments and an aperçu of your plans for the next two months.
-- Mona Risk, To Love a Hero
He was going to lecture that afternoon on Prosperity and, since I was unable to go to the lecture, he was good enough to give me an aperçu of the situation.
-- Ford Madox Ford, It Was the Nightingale
Origin:
Aperçu literally means "perceived" in French. It entered English in the 1820s.
Posted by Mona Risk at 12:49 PM No comments: