A native Georgian of French extraction, Toni V. Sweeney's writing career began during an extended convalescence following an automobile accident. Since her recovery, she has survived tornados and snow-covered winters in the Midwestern United States and currently lives amid the sunshine, earthquakes, and forest fires of Orange County, California. Somehow, she can't seem to stay away from threatening natural occurrences! She is a member of the South Coast Writer's Association, the Pink Fuzzy Slipper Writers website, has her own website, myspace, Facebook, and YouTube pages. She presently has eight novels in publication, as well as several short stories featured in magazines, online, and on amazon.com's Amazon Shorts. More about Toni may be found at www.tonivsweeney.com 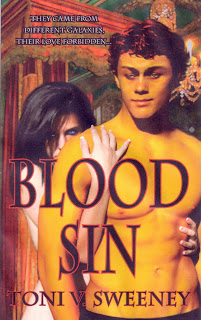 Deroes kan Ingan, Margrave of Arcanis never intends to fall in love, but when he meets Earthwoman Elizabeth Sheffield...and that is exactly what happens.
Spoiled, beautiful Elizabeth is calculating enough to see the status in marrying the ruler of an entire galaxy. Yet there is an unexpected obstacle to her perfect plan to power—Deroes' nephew, Aric.
Raised as heir to the Arcanian throne but now disinherited, Aric intends to make her life on Arcanis as miserable as possible, only to have events take an unexpected turn when he falls in love with his uncle's wife—and she returns his passion.
As the two young people begin their furtive affair, other forces in the kingdom conspire rebellion and murder in an attempt to rid Arcanis of the Margrave's alien bride and his half-Terran child--and the Margrave turns on the one person he believes behind it all: The not-so-innocent pawn, Aric.
EXCERPT:
She heard the outer door open, didn't turn around as soft footsteps came onto the balcony.
"What are you thinking?" Deroes' voice whispered in her ear. A bouquet of brilliant flowers appeared before her.
Pulling them from his hand, she turned in his arms, to be kissed enthusiastically. "Deroes, these are beautiful."
"Flowers from the Royal Garden for my Royal lady, picking by her loving husband."
"And you took time out from your meeting to do that?"
"The meeting is over for the day. I dismissed the Elders. Until sundown, I'm all yours, my Lady."
"All mine?" She gave him an arch look. "To do with as I please?"
Placing one hand over his heart, he bowed. "Whatever you wish, just command me."
"Very well." She held out the bouquet. "Tell me the names of these flowers."
He looked a little disappointed but took it from her, separating the blossoms, holding up one of each. "This is Love Lasts Forever, it comes from Ghermia, in the mountains...."
She sat there watching his face as he recited something about every one and when he finished, said, "Thank you, my Lord," and gathered the flowers. "Would you excuse me a moment?"
Getting up, she went into the bedchamber.
"Elizabeth, what are you--"
"Patience, Sire."
So he sat there, fingers tapping a rhythm on the arm of the divan. When she called him, he stood up and walked hesitantly into the bedroom.
The lights had been dimmed. He could see her lying in the bed, a pale figure in the dark.
"Elizabeth, what is this?"
"Lights, twenty percent!"
The illumination wasn't bright but it was enough to see that she was naked, her only covering the flowers he had given her.
"Since you like to pick flowers so, I thought you might want to do it again."
Posted by Mona Risk at 10:26 PM 8 comments:

Icy Snow Blackstone was born in1802, in northern Georgia where her father, English emigre the Reverend John Blackstone, was prominent in local politics. Two hundred and seven years later, her great-great-great-granddaughter began using her name as a pseudonym for her romance novels. The present Icy Snow Blackstone lives from her Southern roots in Orange County, California, where she is associated with the South Coast Writer's Association. More about Icy Snow's writing can be found at http://www.tonivsweeney.com/ 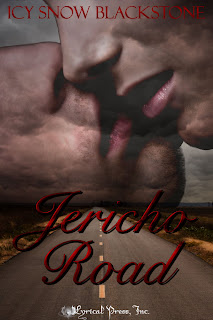 Returning from Vietnam, Wade Conyers' heightened sense of racial equality, engendered by his relationship with an Afro-American soldier in his outfit, immediately clashes with his father's bigotry and prejudice. The specters of that war also threaten his recent marriage to Marcella, a South Carolina socialite. His sister Lindsey's romantic involvement with Logan Redhawk, a part-Mohawk doctor proves the catalyst that uncovers a tangled story of secret lives, adultery, and ultimately murder, as both families learn how one man's hate can defile and destroy the lives it touches.

EXCERPT:
Lindsey looked up at him. "Is it true that your mother's folks don't speak to her just because she married an Indian?"
"Of course not, and it’s Native American," he corrected gently, "not Indian."
"What's the difference?" She frowned slightly and he thought it the most endearing little expression he'd ever seen.
"A lot! Indians are from India. The people of the Six Nations aren't!"
"The Six Nations. Is that what they call themselves?"
"That's what we call ourselves. We‘re the Kanienhehaka."
He expected her to make some other comment, about his siding himself with just one people when he was part of both but she didn't.
Instead, she shrugged and looked at the photo again and said, "Well, I think it would be a stupid way to act! Why, I'd be proud if someone in my family married an Ind--a Native American! Or if I were mar--"
She stopped and looked up at him and blushed slightly, "I mean--" and stopped again.
Neither of them said anything, just stood there, looking at each other.
He was standing too close to her, ought to move away. He could see the quick rise and fall of the tiny breasts, realized that one hand was brushing her hip. He looked down at her, thinking how utterly small and innocent she looked.
And white.
"Well?" Lindsey said softly. "Aren't you going to kiss me?"
Logan didn’t move.
“You’ve been wanting to do it for about three hours now, haven’t you?”
He shook his head. “Four.”
He put his arms around her, pulling her slight body against his, almost lifting her off the floor. He felt her rise onto tiptoe and waver toward him before she regained her balance and then the slender arms were around his neck and she was pressing against him, mouth touching his in a very childish, very chaste closed-lip kiss.
He pulled away long enough to mutter, "Lindsey, maybe we'd better--" and she touched his cheek and whispered, "Shh--" and he kissed her again, thrusting his tongue against her lips, feeling them part and welcome his invasion eagerly.
One hand moved to touch one tiny breast, feeling the nipple quiver into tautness against his fingers. She made a little protesting sound and raised her hand to push against his wrist but as it met resistance let it drop again. Gently, Logan's fingers encircled the soft little mound.
He couldn't know what she was thinking, that abruptly, Lindsey realized that here was a man and not one of those silly awkward boys who were all gropings and heavy breathing. Here was someone who knew exactly what he was doing and what he wanted and frighteningly, he wanted her. She knew she ought to stop him--she could stop him with one word--but his hands felt so good touching her, making hot little shivers generate inside her in places she'd never felt them before.
Just a little longer, she thought. I'll let him touch me just a little longer and then I'll tell him to stop. But she never said the words, not even when Logan picked her up and without taking his mouth from hers, carried her into the bedroom.
Posted by Mona Risk at 3:59 PM 12 comments: